Should Kevin Costner's taciturn rancher John Dutton manspread his snug jeans across one of the allegedly insightful couches of Channel Nine's Parental Guidance, he might label his own family method as "legacy".

After reducing the softies of the "attachment" and "nature" side of the room to the foetal position with a beady-eyed stare, the Montana patriarch would explain - begrudgingly - his whole raison de'etre (not that he'd suffer that "French" mob, either) is to ensure his empire, along with its associated lifestyle and star-spangled ethos, is passed to his progeny.

Nothing else matters. If someone is to be spanked, branded or poisoned by a rattle snake, so be it.

Dutton, of Stan's streaming hit Yellowstone, now back for a fourth season, shares this legacy parenting style with any number of ruthless corporate titans and mob bosses who've kept their friends close and enemies closer on our screens over the years. 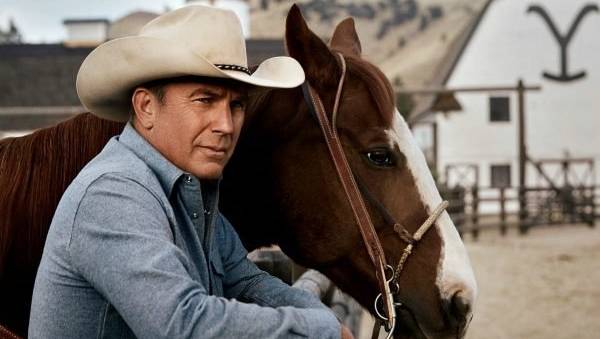 Indeed, it's tempting to pigeonhole creator Taylor Sheridan'saddictive, sprawling series as the IVF offspring of a union between Dallas and Succession (with a little Legends of the Fall and even Heaven's Gate in the mix) but Yellowstone brings its own big-sky-big-pick-up-truck-big-belt-buckle bravado to the birthing suite.

With the thumping power of the relentless machine gun shoot-out with which Michael Mann menaced the streets of L.A. in 1995's Heat, season four of Yellowstone begins amid the attack masterminded by unknown foes on Dutton, his family and ranch that left us on the edge of a cliff at the end of season three.

The violence of white American manifest destiny is thrown into sharp relief in a place where so much blood has already been spilt, chiefly that of the First Nations people with whom Dutton's horse, cattle and boutique bison concern shares an antagonistic relationship.

This cultural unease goes back generations and Sheridan will explore this juicy exposition in his Lonesome Dove-style prequel series, 1883, premiering on Paramount+ next month. A flashback in the new Yellowstone gives us a glimpse of this extended universe as we see Tim McGraw playing James Dillard Dutton (the grandfather of Costner's character) as he confronts displaced and hungry native Americans who have returned to ancestral lands the Dutton clan now claims as its own dynastic dirt.

Along with the constant existential threat posed by developers and the energy sector to the Yellowstone ranch of the 21st century, it's the simmering stand-off with the people of the Broken Rock Reservation at the heart of the series and this season that tension is ramped up further thanks to the arrival of Australia's Jacki Weaver, who, in her Animal Kingdom-esque scheming best, plays the new chair of an equities company with its eye on a game-changing airport for the district.

Weaver gets some great lines ("Living in Montana is just poverty with a view") and one piece of dialogue could even be construed as a cheeky nod to the famous "If you build it, he will come" mantra from Costner's Field of Dreams.

"Build a casino that is a destination unto itself," Weaver's Caroline Warner tells Broken Rock boss Thomas Rainwater.

"Build that casino and we will fund your project and make your reservation the richest in the nation."

Plenty more blood to be wrung out of Yellowstone, yet.

If Dexter Morgan had a parenting style it would be "absent".

The serial killer with a conscience and an OCD penchant for sealed-in plastic cleanliness is back after a decade away from his son and our screens after one of the worst-received series finales in TV history.

The Dexter reboot streaming on Paramount+, Dexter: New Blood, may or may not be necessary but does seem an attempt to atone for the sins of the past with the return of foundation showrunner Clyde Phillips and director Marcos Siega.

Ten years after all that unpleasantness in Miami (the barely watchable back half of the series, not the regular gore), we've travelled north to chilly upstate New York where Dexter is living incognito in his own private Truman Show in a small town called Iron Lake. 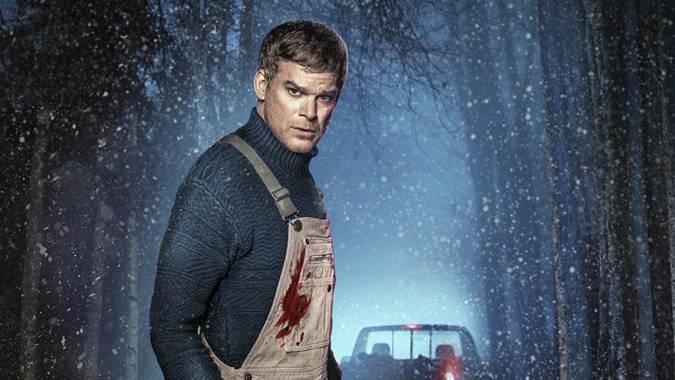 Like Truman Burbank, Dexter's uneasy, all-round nice guy Jim Lindsay (played by Michael C. Hall) is plagued by imposter syndrome, feels like he's being watched and gets through the day by spouting inane, pulse-dampening platitudes ("Thanks for shopping at Fred's Fish and Game").

Trouble is, Dexter's blood lust and his blood lines, in the shape of abandoned child Harrison, are sure to catch up with him and Iron Lake has a number of candidates worthy of being gutted like fatty fish hauled up from the locale's augered ice holes.

As with Yellowstone, guns are prevalent in Dexter: New Blood and one $9000 specimen acts as a catalyst for the re-emergence of Morgan's true self.

Even with FBI background checks, firearms seem ludicrously easy to get your hands on, reminding us what a parallel universe the United States continues to be. 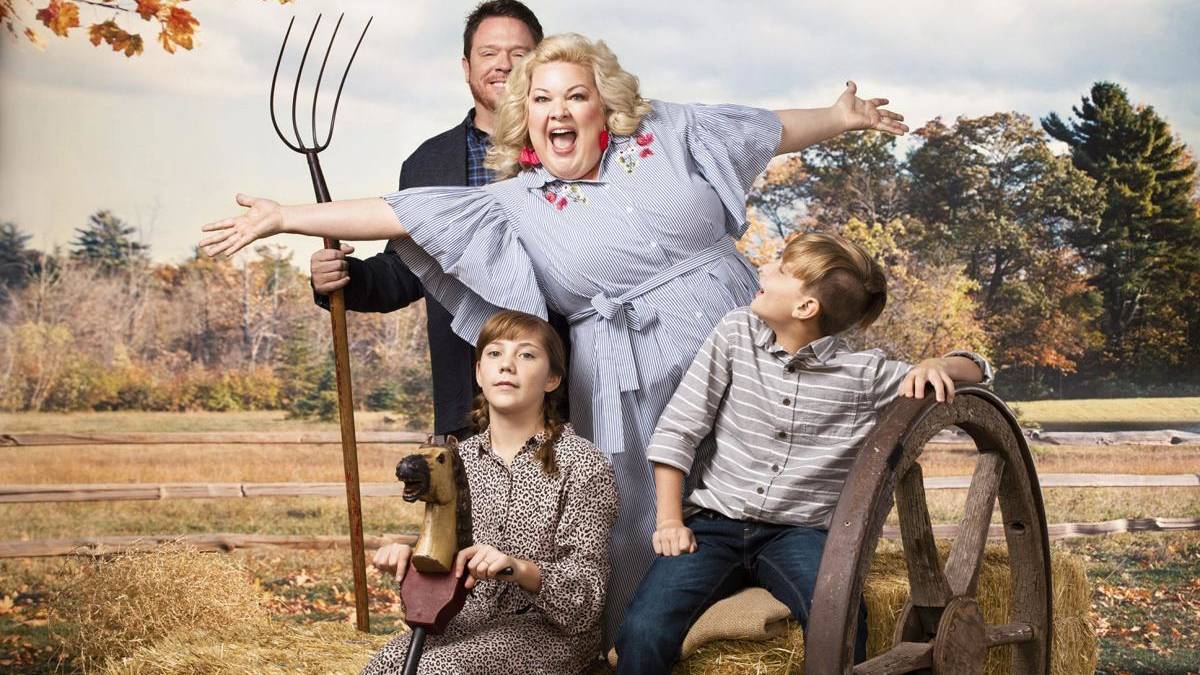 Thriving in this parallel universe is social media celebrity Melissa Radke, who would proudly claim her own parenting style as "crap".

E! reality show The Radkes (streaming on Foxtel) follows a very average family's return to its small hometown of Lufkin, Texas, and, well, that's about it.

Unlike similar heartland reality shows, where the interest lies in the fact the family being filmed might compromise little people or religious zealots with 20-plus children, we struggle to understand why Melissa and husband David deserve any sliver of the spotlight at all.

We learn their two kids are adopted, which is nice, and a (Google, not FBI) background check uncovers some tragedy, which is sad, but what appears to establish the Radkes as remarkable is their white-flag/white-bread take on parenting.

To be sure, Melissa - as if from a Tom Petty song - loves being a "mom", "Jesus" and "Oprah" too, but her superpower is her maternal mediocrity.

"It took a lot of years and heartache to realise that I am not that great at it," she says amid several glaring examples, from singing sex education advice to her pubescent daughter to the tune of a Christmas carol, to discouraging her children's academic ambitions because they're competing against families of subcontinental heritage.

Brassy Melissa is the parenting equivalent of comfort food. Nothing in her carefully contrived existence - which, despite all the celebrated lack of effort, appears replete with luxury and privilege - can't be solved without several slices of cake or a brisket cook-off.

This family is supposed to make us feel good about our own failures and even better about the fact our own kids probably won't turn out to be as talented and successful as we once might have hoped, so better to quit while we're ahead and drown those first-world sorrows in a couple of supersized bottles of soft drink.

Someone get the Radkes on that Parental Guidance couch, now.

This story Costner buckles up for fourth season of Yellowstone first appeared on The Canberra Times.