Anas Atassi hopes to build a bridge between Syrian culture and the rest of the world, with food as the common denominator. But even more, he hopes that his cookbook Sumac will present a positive image of his country, "in spite of all of the unfortunate events now taking place in Syria", he says.

Sumac is a deep red spice that adds a vibrant lift to all kinds of food, and is a prized ingredient in both traditional and contemporary Syrian cuisine. This book includes more than 80 recipes inspired by Atassi's family recipes and travels, as well as the stories, celebrations and memories of loved ones in Syria that inspired the recipes. It includes the wonderful Friday breakfasts he'd eat in his grandmother's garden, his mother's sfeeha, along with the falafel he now loves to make for his friends, along with many other mezze, salads, meats, vegetables, and desserts. Sumac is an evocative and inspiring food journey that offers a glimpse into Syrian food culture's deep historical roots, which through millennia of cultural traditions and neighbouring influences have been shared and shaped to perfection.

This is a well-known dish in Syrian cuisine. There is no single "real" way to prepare it, nor does the dish have a fixed ingredient list. It's improvisational and as simple as chopping up some vegetables and serving them with a dressing. That's it. It's the toasted flatbread on top that makes it a fattoush. Despite its variability, this dish tastes, like none other, of Syria. It tastes like the country, like the earth, like the local and the regional. It tastes like a hundred stories. A beautiful dish.

1 head romaine lettuce (washed and cut up into large pieces)

1 flatbread (toasted and torn into pieces)

1. In a small bowl, use a fork to whisk together all the dressing ingredients except the sumac.

2. In a large bowl, and using clean hands, toss all the salad ingredients except the flatbread pieces. Add the dressing, one tablespoon of the sumac, and toss. Let the salad rest to meld the flavours.

3. Before serving, arrange the toasted flatbread croutons over the salad and sprinkle the other tablespoon of sumac over the entire dish.

Tip: In Syria, purslane is often used in fattoush. If you can't find purslane, romaine lettuce is a tasty alternative. This recipe is my mother's invention and is truly a fusion dish, thanks to the dates that are ubiquitous in Saudi cuisine. When I asked my mother for the recipe, she didn't even remember having made this cake. She was convinced that it was one of her friends' recipes. It was only after a friend found a recipe from decades ago, written in my mother's penmanship, that she believed that this recipe was hers. Perfect for coffee or dessert.

For the caramel sauce:

round springform or metal cake pan

2. In a heat-proof bowl, pour the boiling water over the dates. The dates should be completely covered. Soak for 15 minutes.

3. In a food processor, blend the dates and the soaking water for 30 seconds, or until the dates are in tiny pieces. The texture should not be completely smooth.

4. With a hand mixer, beat together the eggs, oil, milk, vanilla extract and brown sugar for two to three minutes until well combined, light in colour and fluffy.

6. Line the bottom and sides of the cake pan with baking paper. Pour the batter into the pan and bake for 30 minutes in the middle of the oven.

7. While the cake is baking, make the caramel. In a large non-stick pan, heat the sugar on medium heat. The sugar will melt and start to caramelise. Do not touch or stir the sugar. It will begin to melt where it touches the sides of the pan. Now you can carefully let the sugar bead up and swirl around in the pan.

8. Add the butter when the sugar starts to become liquid and golden-brown. The caramel will start to bubble and spatter. Do not stand too close.

9. Stir the caramel with a wooden spoon until the butter is completely melted and then pour the cream in, stirring constantly. Continue cooking the caramel for two to three minutes to thicken it.

10. When the caramel starts to coat the back of the spoon, add the salt. Stir and take the pan off the heat so that the caramel can cool.

11. Take the cake out of the oven and cool for at least 30 minutes before taking it out of the cake pan.

12. Place the cooled cake on a cake stand and drizzle with the caramel sauce. This recipe is an ode to sumac - originally from Palestine, where they serve a whole chicken with sumac on bread, topped with a whole lot of sumac-spiced onions. Using the same ingredients, we make a Syrian version here by shredding the chicken, then frying it with onion and sumac and rolling it up in flatbread.

1. Bring a large pot of water to boil. Add the chicken breast, the a'atryaat garni and a pinch of salt and pepper. Cook the chicken for 20 minutes.

2. Drain the chicken breast and cool. When they are cool enough to handle, shred the meat with your fingers.

3. Heat half of the olive oil in a saucepan on medium heat. Fry the onion for five minutes. Add the shredded chicken, sumac and pine nuts and the remaining 50ml of olive oil. Fry everything together for five minutes. Salt and pepper to taste.

4. Ladle a few spoonfuls of the shredded chicken on to each flatbread. Wrap the flatbread toward the inside and then fold it into a rectangle.

5. Heat the grill pan on high heat and grill the wraps for two minutes on each side until golden and crispy. Serve them warm with laban bi khyar (see below).

A'atryaat is a Syrian bouquet garni consisting of cinnamon sticks, laurel leaves, cloves and cardamom pods. The word a'atryaat means "perfume" and it is used to impart a subtle flavour to stews. The components of the bouquet garni are sometimes added directly to the pan, without bundling them first. A'atryaat garni is not sold pre-made; it is something you make yourself. My recipe uses: 2 cinnamon sticks, 2 cloves, 3 green cardamom pods, and 1 laurel leaf.

All Middle Eastern and Balkan countries have their signature version of this dip. The Greeks eat tzatziki, Indians eat raita. The Syrian version uses a Syrian yoghurt, distinctive because it is a bit thicker than most yoghurts and has a citrusy freshness. In this recipe, I use Greek yoghurt because it is readily available.

1 tbsp of dried mint or

1. Combine all the ingredients in a bowl. Salt to taste. Serve the sauce cold, drizzled with extra-virgin olive oil and sprinkled with mint leaves. Enjoy as a dipping sauce or as a side to other pilaf dishes. 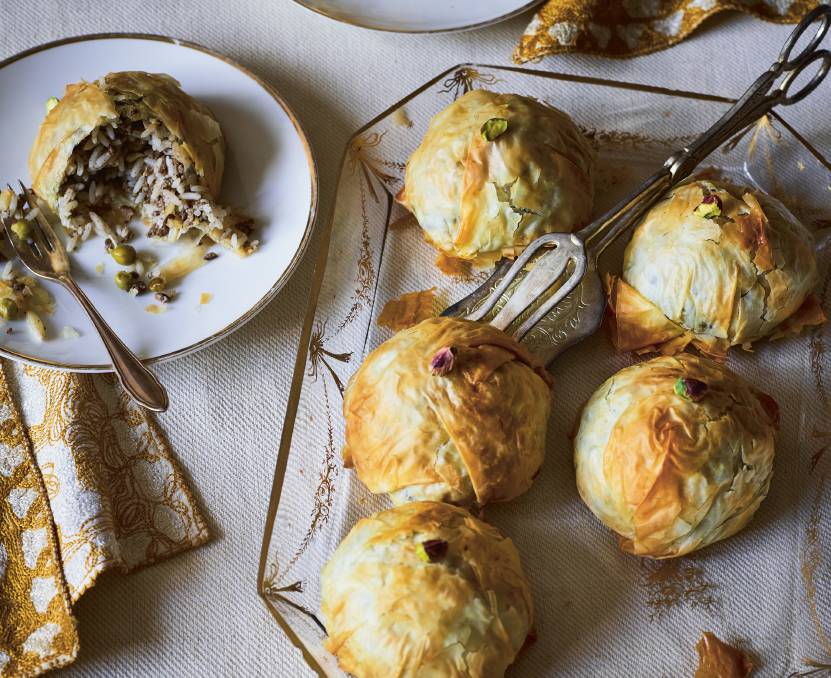 This is a comfort food typically eaten in Damascus. The pastries make an impression and are beautiful to present. Every guest is served their own small, savoury ouzi, as though made especially with them in mind. As a child, I ate these often when we were invited to my parents' friends' house. They came from the capital city and I thought it was exciting to visit them, wondering: would they serve ouzi pastries again?

1. Heat the oil in a large pan on medium heat. Break the minced beef up into small pieces with a wooden spoon and brown for seven minutes. Stir in the seven spices blend.

2. Mix the rice and cardamom into the minced beef and add the beef stock. Add salt and pepper, and continue cooking the rice for 15 minutes, or until most of the stock has been absorbed.

3. Stir the peas and the toasted nuts into the cooked rice. Warm everything for another minute and then turn the heat off, cover and let the pilaf rest for five minutes. Salt and pepper to taste.

5. Fill the filo cup with the pilaf and press on the rice with the round part of a spoon. Fold the excess dough hanging at the edges over the rice to cover. Seal the filo edges by brushing once more with some olive oil. Turn the pastry out onto a plate. Repeat to form the other pastries in the same way.

6. Heat the oven to 200C. Prepare a baking tray with baking paper, set the pastries on the baking paper and then brush with olive oil. Bake for 15-20 minutes, until they are a nice golden brown. Garnish the pastries with a pistachio and eat them warm. This story An ode to Syria: How to add popular Middle Eastern dishes to your meal rotation first appeared on The Canberra Times.