With the federal election this Saturday, candidates for the Calare electorate are campaigning hard to attract final votes.

CSU political science Associate Professor O'Sullivan said strategies would be in place to target the 18 per cent of voters in Calare who are aged 70 years or older.

READ MORE: Still don't know who to vote for? Meet the Calare candidates

"The population is ageing and rural seats, like Calare and Parkes, more than in urban seats so obviously candidates in those seats will be mindful of that," he said.

"A big part of the Coalition's campaign is targeted towards older people who might be affected by the Labor Party's policy to remove franking credits for people in receipt of pensions from superannuation funds."

The population is ageing and rural seats, like Calare and Parkes, more than in urban seats so obviously candidates in those seats will be mindful of that.

However, he said there were other large demographic sectors in Calare who would be looking for policies that appealed to them.

"Climate change seems to be an issue that is important for people across age groups, but perhaps a little bit more so for younger people," Assoc Prof O'Sullivan said.

"Younger people tend to engage more with social media for example, and perhaps more so on specific issues rather than with political parties."

He said Labor's childcare policy would be very appealing to people with young children.

The drought is the "single most most important issue for people in parts of those electorates" and he said the right policy will attract voters.

Calare might traditionally be a Nationals stronghold, but Assoc Prof O'Sullivan predicts the party might not win so convincingly at this election.

READ MORE: Need to cast an early vote? Here's the locations in Calare

"I think in terms of Parkes and Calare, it's likely the Nationals candidates will prevail, but with a swing against them," he said.

"Both those seats overlap with seats that were won by the Shooters and Fishers Party at the NSW state election.

"Although the Nationals retained the seat of Dubbo in the state election, there was a very very significant swing against the National Party there."

Assoc Prof O'Sullivan said he expects Labor to win the federal election but that there were "some very interesting seats that are a bit difficult to predict".

Talkin' 'bout your generation, and voting... 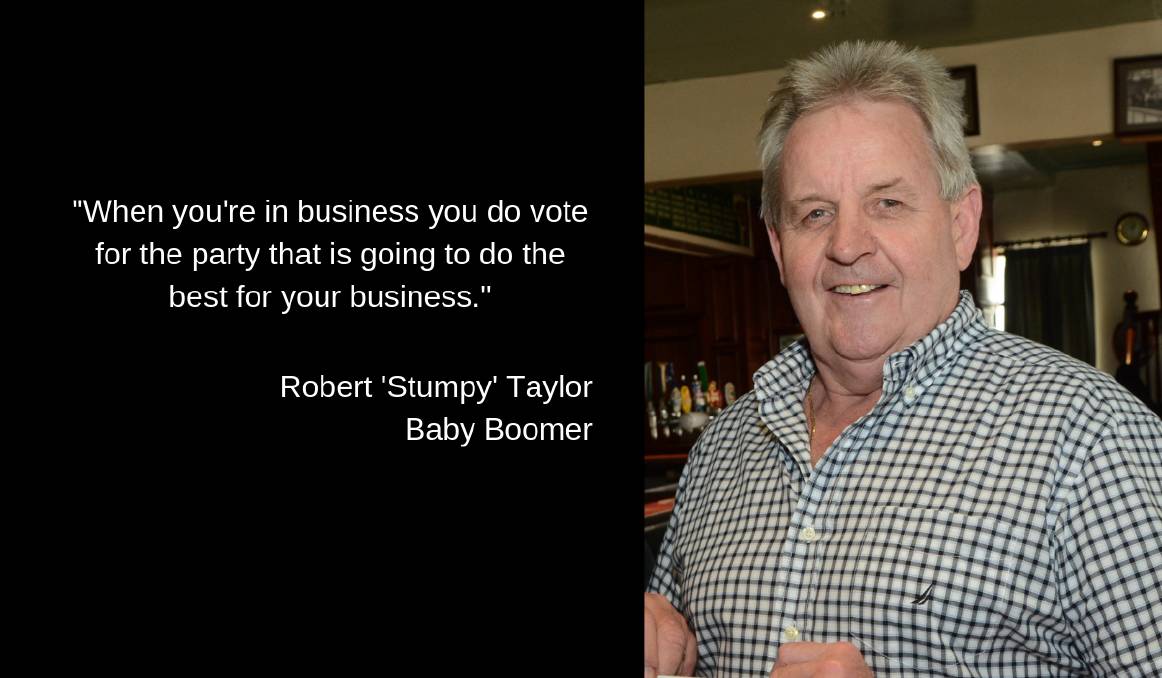 A: I do swing. When you're in business you do vote for the party that is going to do the best for your business.

A: My biggest concerns are electricity prices and water security. The cost of electricity is the biggest burden, especially for businesses.

A: Immigration has to be looked at. They're all banging on about water security, but we've got to feed them all [migrants]. Let's get it right now with the people we've already got before we let more in. To all the do-gooders and lefties, if they want to stand by their word and let these people in they should be prepared to pay an extra 2.5 per cent tax to let them in and support them. 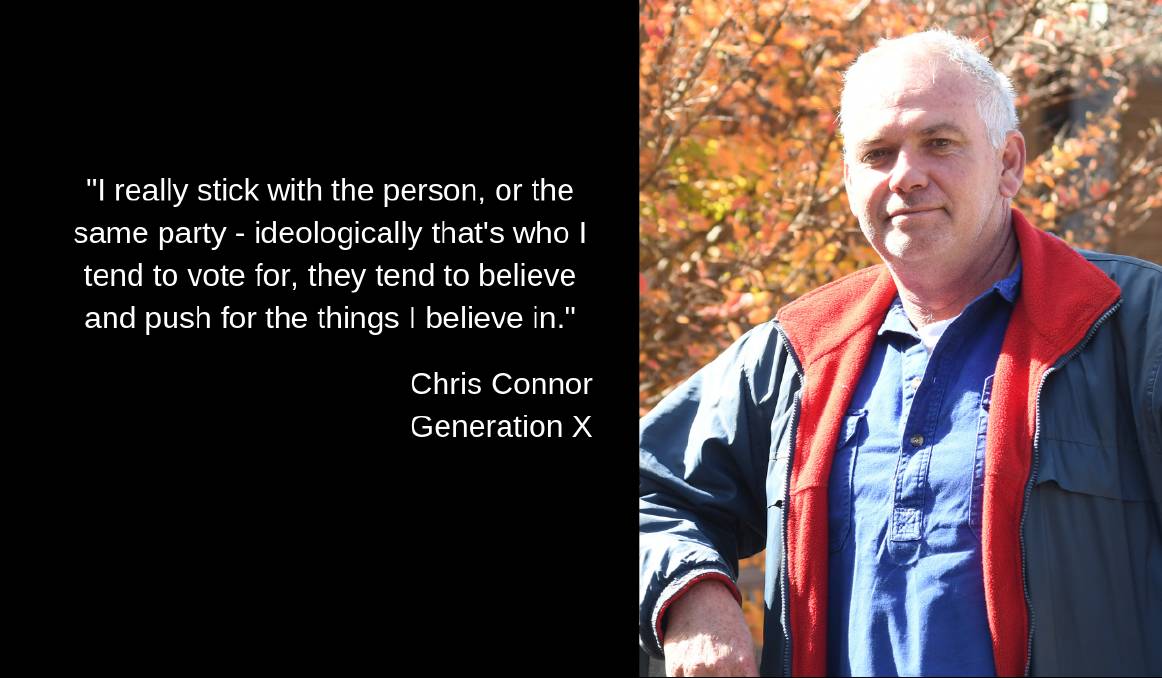 A: I really stick with the person, or the same party - ideologically that's who I tend to vote for, they tend to believe and push for the things I believe in.

A: Probably social harmony, more so how we tolerate refugees - I think we seem to be heading down a path of people wanting to find blame in other people for the situations they're in. People are under the impression they're a burden on society, but it's more that they add to our society financially and socially. Yes, the government hasn't kept up with the infrastructure, but that's not the fault of immigrants. I'm also concerned about the medical side of things and hospital waiting times - the waiting times are getting longer and there's a disparity between the people who are able to afford private insurance and not afford private insurance.

A: I certainly think some action on climate change would be a big thing - it will impact on everybody in the future and I think we could get more renewables. Quality of life is certainly going to diminish if we do nothing because it's going to start costing. Certainly power prices would come down with more renewable resources. 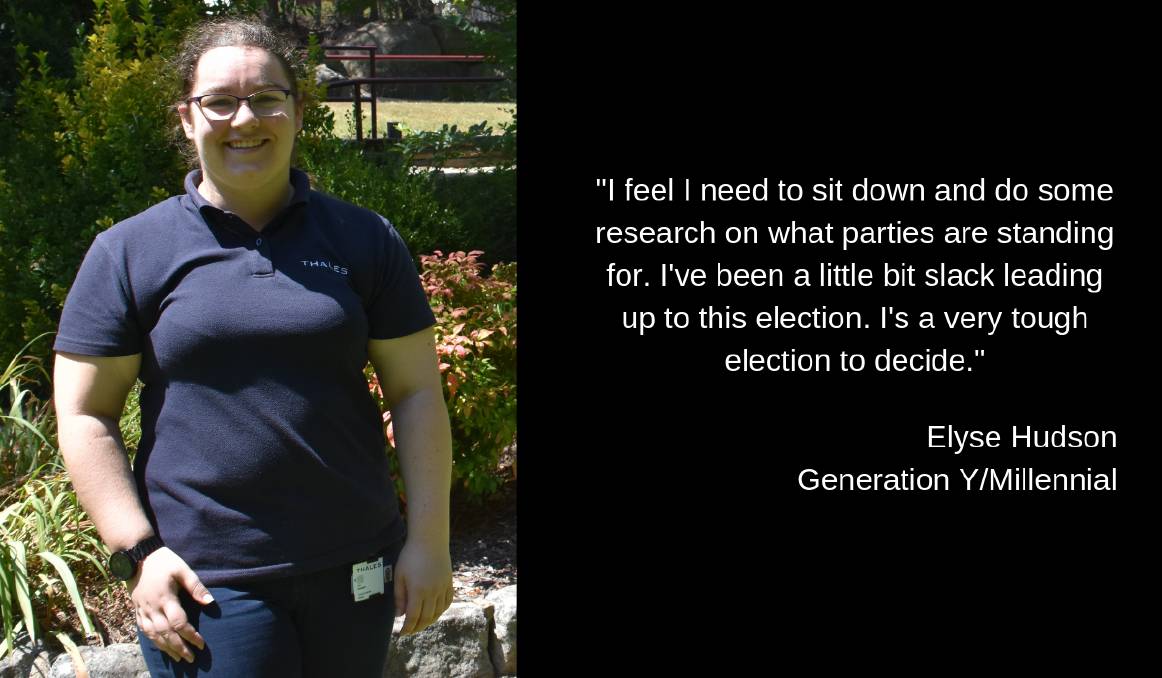 A: No, I feel I need to sit down and do some research on what parties are standing for. I've been a little bit slack leading up to this election. I's a very tough election to decide.

A: Based on my experience in Lithgow, the biggest concern is employment and employment into the future. With talk focused on climate change, Ms Hudson fears it may have an impact on Lithgow's two big employers - mining and manufacturing. If we transition away from that, what's the future of our employment?

A: Employment opportunities. As a young person, many people don't see their career opportunities in our area. Often they feel they have to leave the area in their 20s to 30s to get a better education or career. 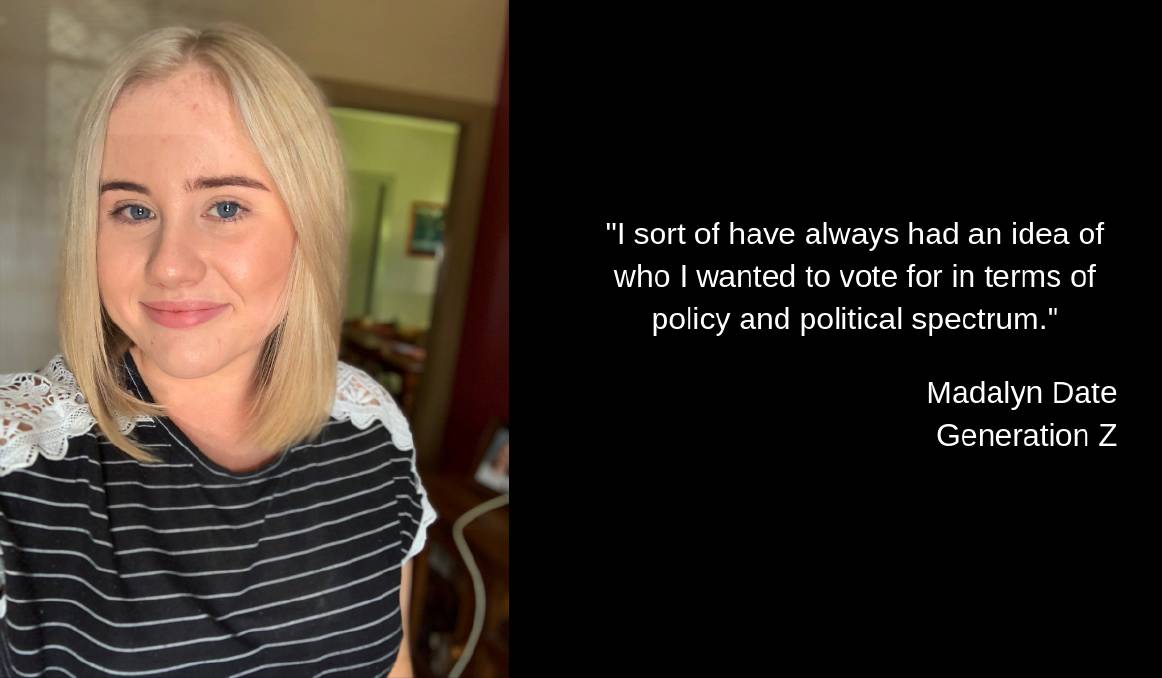 A: Yeah, I think I have already. I sort of have always had an idea of who I wanted to vote for in terms of policy and political spectrum.

A: The state election was the first time I voted and I will probably vote the same way, but it's a bit more difficult this time. Personality is a big factor for me and I've grown up being quite well represented by Andrew Gee.

A: This is a little difficult - I live in Calare, but I study in Wollongong. Education is a big issue and I think more money could go to government schools in Calare. Access to better health services for those who do live in regional Australia is important. Bathurst, Orange and Dubbo do have good services, but for those who live in smaller areas have to travel two to three hours for services.

A: Our water tanks have been dry for about three years and we're in town so I definitely think in terms of our family's quality of life that there needs to be a better focus on the drought and how it's affecting people. We're buying water in to drink.

Polling booths are open from 8am until 6pm sharp.